When it comes to visual icons of the Disney Parks around the world, nothing stands out quite as majestically as the Parks’ castles.

Today we take a look at the crown jewel of the Disney Parks around the world: their distinctive and beautiful castles.

We’ll start where it all began.

Sleeping Beauty Castle in Disneyland Park was the Park’s centerpiece when it opened on July 17, 1955. It stands 77 feet tall. Starting in 1957, could walk through the Castle to see the details up close. Sleeping Beauty Castle is one of the shortest Disney Castles. And this was the only Parks castle overseen by Walt Disney himself.

Right in the center of the spoke-and-wheel design in Magic Kingdom is the most iconic of the Disney castles. In 1971, Walt Disney World’s Cinderella Castle opened standing an impressive 189 feet tall. In Cinderella Castle guests can dine in the popular restaurant Cinderella’s Royal Table, where they enjoy meeting a handful of Disney princesses. There is even a secret suite in the top of the castle that has only been inhabited by a lucky few.

Opening in 1983, Cinderella Castle in Tokyo Disneyland is similar to the one in Magic Kingdom in terms of styling, but there are a few minor differences. The castle is slightly shorter than its sister castle in Orlando at only 168 feet tall, and some of the details are in starker contrast. Cinderella Castle in Tokyo used to have a walk through attraction called Cinderella Castle Mystery Tour that involved the villains taking over and ended with a terrifying Horned King animatronic. And this Castle, like many others, has also featured some seasonal or celebratory overlays. 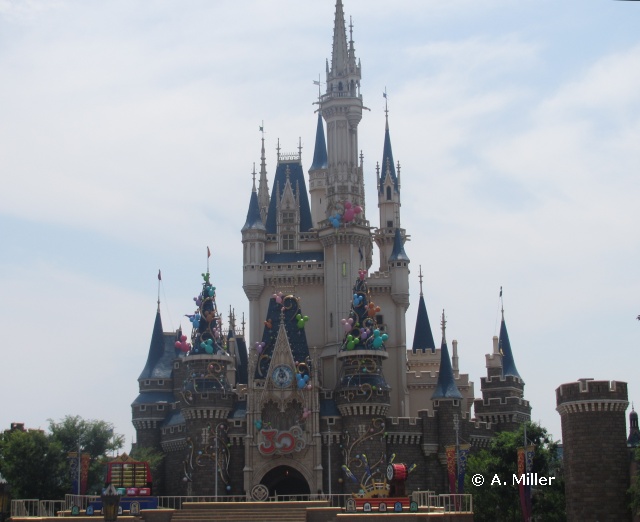 If you aren’t fluent in French, Le Chateau de la Belle au Bois Dormant means the Castle of the Beauty in a Sleeping Wood. Sleeping Beauty Castle in Disneyland Paris is 167 feet tall and sits atop a hill straight out of the animated film. It even has those splendid square trees. Beneath the castle is a short walk through attraction with a sleeping dragon that occasionally wakes up and breathes smoke. In the top of the castle there are mosaics and stained glass windows that tell the story of Sleeping Beauty. We think the hill detail really makes this a stand-out.

From 2005 until 2018 Sleeping Beauty Castle stood in the heart of Hong Kong Disneyland. The castle was almost an exact copy of the one in Disneyland, with just subtle differences in color. In preparation for Hong Kong Disneyland’s 15th anniversary, the castle was closed to be completely re-done. The castle is being replaced by the Castle of Magical Dreams that was originally set to open in the Summer of 2020, but the date may be effected by the temporary park closure. The new castle will pay tribute to 13 different princesses, including classic ones like Snow White and Cinderella alongside newer heroines like Moana and Tiana. The castle is set to be 167 feet tall when it is completed — so Hong Kong’s Castle is truly movin’ on up.

We love all the Disney Parks castles, one more than the others (Le Château de la Belle au Bois Dormant). We can’t wait to see what the new Castle of Magical Dreams looks like when it is completed.

What is your favorite castle in the Disney parks around the world? Let us know in the comments.