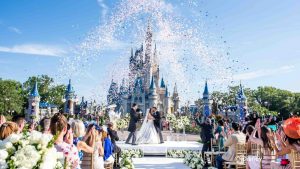 Posted on July 30, 2019 by Danny Gallagher
Disney's theme parks in Anaheim and Orlando, the Disney Cruise Lines and Disney’s Aulani all offer wedding packages that vary in price from affordable to “Wait… HOW much?” We went through the prices offered by Disney’s Fairy Tale Weddings and Honeymoons and broke them down. Let's take a look!
No Comments Posted on July 10, 2018 by Debra Martin Koma
The Tree of Life at Disney's Animal Kingdom is the newest venue available to couples looking to "tie the knot" at Walt Disney World. Disney's Fairy Tale Weddings & Honeymoons calls the park icon "the picture-perfect backdrop for a memorable wedding." Beyond Disney's well-known Wedding Pavilion, other possible settings for Disney World weddings include Fort Wilderness Resort and Campground with views of Seven Seas Lagoon, in front of Cinderella Castle at the Magic Kingdom, and the Chinese Theatre at Disney's Hollywood Studios.
No Comments Posted on March 28, 2010 by Steve Barrett
On the first day of spring, my wife Vickie and I were honored to be invited to a wedding at Disney World. We arrived at the Wedding Pavilion near the Grand Floridian Resort before 5 p.m. At one point before the ceremony, some of the guests stood and looked left through the windows of the … Continue reading "A Disney Wedding"
6 Comments