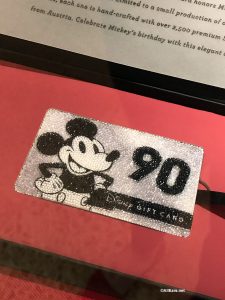 A Crystal-Encrusted Disney Gift Card You Have to See!

Posted on January 11, 2019 by Sarah Sands
There's a new gift card option in Disney World and Disneyland that you must see! Take a look at the photos of a special Swarovski crystal-encrusted gift card!
2 Comments Posted on August 22, 2018 by AllEars
It’s not every day a worldwide icon turns 90! That’s why Disney is celebrating Mickey Mouse’s upcoming birthday with a bang! So far, an official portrait has been released, a television special has been announced, and a special pop-up exhibition will open in NYC with preview installations across the country. Now, we’ve learned how the … Continue reading "Mickey’s 90th Birthday Merchandise and Worldwide Park Celebrations Announced!"
One Comment