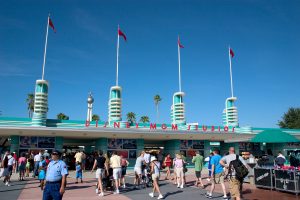 The genesis of Disney’s Hollywood Studios, which turns 30 on May 1

Posted on March 25, 2019 by Chuck Schmidt
Originally, the Disney-MGM Studios was conceived as a new attraction in Epcot’s Future World before it evolved into a major theme park. On May 1, the park will celebrate its 30th anniversary with a new name, new attractions and new lands.
No Comments

From Eddie to Marty to Charlie: The Disneyland PR Connection

Posted on November 26, 2018 by Chuck Schmidt
From Eddie Meck to Marty Sklar to Charlie Ridgway, the Disneyland publicity department was blessed with a host of talented individuals who helped get the word out on the fledgling theme park ... as well as the resorts that would follow around the world.
No Comments 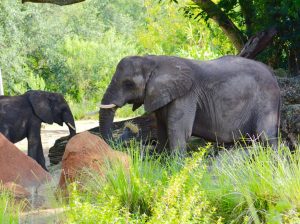 Posted on November 12, 2018 by Chuck Schmidt
At Disney's Animal Kingdom, Caring for Giants is a behind-the-scenes look at the magnificent pachyderms who roam freely in the park’s vast savanna.
One Comment

The important role music has played throughout Disney history

Posted on September 10, 2018 by Chuck Schmidt
The record covers for Disneyland Records’ “Lady and the Tramp,” “Bambi” and “Pinocchio” soundtracks. [Chuck Schmidt] When plans for Epcot were being formulated in the 1970s, it dawned on Marty Sklar of Walt Disney Imagineering that he and his team were overlooking something important, fundamental and functional … a Disney parks staple that hadn’t seen … Continue reading "The important role music has played throughout Disney history"
No Comments Posted on August 20, 2018 by Chuck Schmidt
A magazine advertisement for Eastern Airlines, which was the official airline of Walt Disney World when the resort opened in 1971. [Chuck Schmidt] “You can observe a lot by watching.” So said the great American philosopher, Lawrence Peter [Yogi] Berra. Most of us have Disney books and magazines tucked away somewhere. Some are probably years, … Continue reading "You can learn a lot by leafing through decades-old Disney magazines"
2 Comments A look back at Epcot’s creation

Posted on July 23, 2018 by Chuck Schmidt
The cover of Epcot’s pre-opening brochure, which gave detailed descriptions of each attraction to be featured in the first-of-its-kind park, which opened on Oct. 1, 1982. [Chuck Schmidt] Epcot celebrated its 35th anniversary last fall. With that important milestone came a commitment on the part of the Walt Disney Company to add new experiences to … Continue reading "A look back at Epcot’s creation"
No Comments Posted on July 9, 2018 by Chuck Schmidt
Chuck Schmidt, a longtime Disney fan and collector, shares some of his most treasured Disney items and their associated memories in his latest "Still Goofy About Disney" blog.
One Comment Posted on June 11, 2018 by Chuck Schmidt
Walt Disney stands with a model of the “it’s a small world” pavilion, one of the stars of the 1964-1965 New York World’s Fair. [The Walt Disney Company] Walt Disney never did anything half-way. He always seemed to take a damn-the-torpedoes, full-speed-ahead approach when his fertile imagination dreamed up a seemingly impossible project. And so … Continue reading "Disney’s Interest in World’s Fairs Beyond the 1964-1965 New York Event"
No Comments