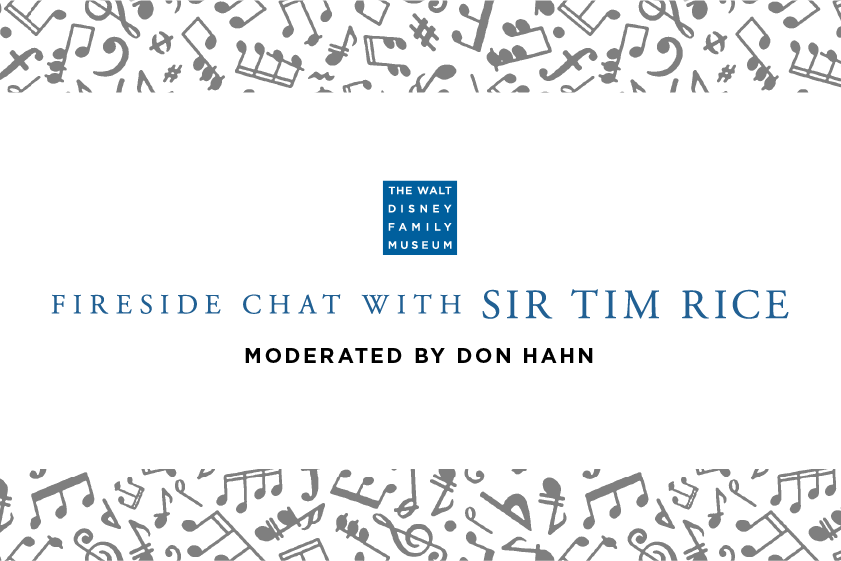 The first half of the event was a career-spanning discussion of Sir Rice’s many works in musical theater with long-time Disney filmmaker Don Hahn.

From his early pop culture influences ranging from The Everly Brothers to Dell Comics, to his first hit show Jesus Christ Superstar with Andrew Lloyd Webber, Sir Rice had amassed an impressive body of work before working with Disney that also included Joseph and the Amazing Technicolor Dreamcoat and Evita.

It was while he was working on a movie version of Evita that Howard Ashman passed away and Sir Rice was invited in to work with Walt Disney Animation Studios to finish the music for Aladdin with Alan Menken.  The two subsequently won an Academy Award for “Whole New World” in 1992 for Best Original Song.

Subsequently, he also worked on Lion King, for which he brought in Elton John to do the music and with whom he again won Best Original Song in 1994 for “Can You Feel The Love Tonight.”  Disney Theatrical Productions teamed him up again with Menken for the Broadway adaptation of Beauty and the Beast, and with John for the original musical Aida, while recent years have also seen him collaborating on the live-action versions of Beauty and the Beast and Aladdin.

If you would like to watch the presentation for yourself (highly recommended,) the Museum has a public video up for viewing on their webpage with the first three performances.  An extended version of the event with all the songs was also available for donors/sponsors–donations can still be made to support all the great programming and fantastic historical exhibits the Museum provides at The Walt Disney Family Museum: Fireside Chat with Sir Tim Rice.