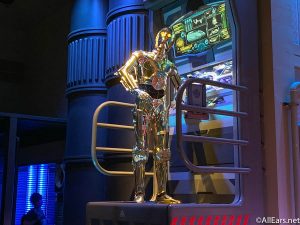 How Many of These Underrated Disney World Attractions Have You Experienced?

Posted on May 30, 2021 by Carly Terzigni
Disney World is filled with some popular rides, but today we're celebrating all of the underrated attractions in each of the parks!
One Comment Posted on January 29, 2018 by Debra Martin Koma
Tickets are now on sale for Star Wars: Galactic Nights, a one-night special event that will return to Disney's Hollywood Studios on May 27. The event is held after park hours from 7 p.m. to midnight and celebrates the entire Star Wars saga with special entertainment, photo opportunities, event-exclusive merchandise and food and beverage, as well as encounters with rarely seen Star Wars characters. Other event offerings include Galactic Destinations Projections on The Hollywood Tower Hotel and the debut of new saga elements to the Star Wars: A Galactic Spectacular fireworks and the Star Wars: A Galaxy Far, Far Away stage show. Tickets cost $129 per adult, $124 per child ages 3-9. Discounts on tickets are available for Annual Passholders and Disney Vacation Club Members. In addition, the Galactic Tasting and Viewing Package, featuring Star Wars-inspired food and beverage and reserved seating to a panel providing an inside look of the making of Star Wars: Galaxy's Edge, is now available for $30 per person, including tax. It, and tickets to the event, can be purchased online or by calling (407) WDW-DINE or (407) 939-3463.
No Comments Posted on December 12, 2017 by Scott Thomas
The anticipation as you watch the pre-boarding video at Star Tours in Disney’s Hollywood Studios in waiting for the doors to open gets your adrenaline pumping. You wonder which sequences will be shown and who will be the Rebel spy the Empire will be looking for. Maybe it will be you! Doors open to a … Continue reading "Disney Pic of the Week: Star Tours"
No Comments Posted on September 19, 2017 by Debra Martin Koma
Star Wars: Galactic Nights is returning Dec. 16 to Disney's Hollywood Studios. Among many thrills in store, guests will be treated Hollywood-style to a red carpet arrival, iconic attractions with little to no wait time, amazing fireworks and projections, and experts sharing details about the Star Wars expansion coming to Disney's Hollywood Studios. Callers to 407-WDW-PLAY (407-939-7529) will be able to sign on for premium offerings such as a Galactic Tasting Sampler (food and beverage items including lightsaber churros and a charcuterie with C3PO crackers). Park access and activities will be exclusive to Star Wars: Galactic Nights ticket holders. Event hours on Dec. 16 are 7 p.m.-midnight. Tickets are priced at $129 adults, $124 ages 3-9 (discounts available for Annual Passholders and DVC Members). Purchase tickets at DisneyWorld.com or call 407-W-DISNEY (407-934-7639).
No Comments Posted on January 11, 2017 by AllEars
Attention Star Wars fans -Star Wars: Galactic Nights, a new Hollywood-inspired special event will debut at Disney's Hollywood Studios on April 14. Come dressed as your favorite character and celebrate forty years of Star Wars milestones. NOTE: Though the title says nights, as of January 11, only one night is available for ticket purchase.
No Comments Posted on December 5, 2016 by Debra Martin Koma
A galaxy of new Star Wars experiences is coming to Disney's Hollywood Studios beginning mid-December. The announcement -- made today at Walt Disney World Resort -- noted that some of the coming-soon additions are inspired by "Rogue One: A Star Wars Story" that opens in theaters worldwide on Dec. 16. Guests, including fans of the epic space saga, will find new entertainment, special displays inside Star Wars Launch Bay, a first-ever themed tour and more at Disney's Hollywood Studios.
No Comments Posted on December 21, 2015 by Debra Martin Koma
Star Wars fan that I am, I have to say that I was thrilled to learn that new Star Wars-related experiences would be starting in Disney’s Hollywood Studios on December 1, just in time for my holiday trip to Walt Disney World. I was even happier to find out that there would be a media … Continue reading "New Star Wars Experiences at Disney’s Hollywood Studios"
No Comments Posted on November 9, 2015 by Debra Martin Koma
More new Star Wars experiences are coming to Disney's Hollywood Studios early next year, in addition to those that will begin December 1 as announced in last week's AllEars newsletter: Star Wars Launch Bay, Jedi Training: Trials of the Temple, Path of the Jedi, and an updated Star Tours: The Adventures Continue. Starting January 5, 2016: First Order Stormtroopers will be patrolling the park, interacting with guests as part of their mission to find members of the Resistance The fireworks show called "Symphony in the Stars: A Galactic Spectacular" will be performed nightly. The show will be set to music from all the movies in the Star Wars saga. Star Wars-inspired food and beverage offerings will be available at various locations inside Disney's Hollywood Studios. Various novelty items and specialty foods, such as Blue Milk Panna Cotta, Padawan Limeade, BB-8 Lemon and Butter Cream cupcake, as well as a Han Solo Souvenir Kid's Meal served in a Han Solo-themed bucket, will be offered for purchase. In addition, there will soon be a dessert party during the Star Wars-themed fireworks show that will feature themed desserts, specialty drinks and a souvenir Chewbacca stein.
No Comments