This week is Thanksgiving in the US! 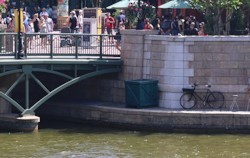 The Ponts des Arts bridge between the UK and France pavilion.

My husband and I celebrated our anniversary a couple weeks ago. We went here on our 10th and i asked him what’s his favorite spot in Disney: he said this bridge because of the view. I got him a special gift and went to surprise him here; everything was going wrong. it took a half hour longer to get here and I was soooo on edge by the time we got there. Meanwhile, he’s griping with “Why can’t we go on the boat?”, “Why do we have to stop here?”, etc. I had a little speech that I barely got out from emotion and he said when he first looked, I think I have one of these. I wanted to push him off the bridge. 🙂 But he did love the gift and hugged me. There’s marriage for you!

Hint: this is next to a tree with lanterns hanging in it

Do you know? Do you have a guess? Send in your answer before the end of the day on Thursday, November 25th by clicking on the blue box below. Please do not post your answers on this blog post.

Erin Blackwell works on the Where in the World Photo Blogs. A website developer by day, she adores Mickey Mouse and his brother Oswald. Her favorite place in Disney World is the Fort Wilderness Resort and Campground, which is where she loves to hang out with her husband and dogs.