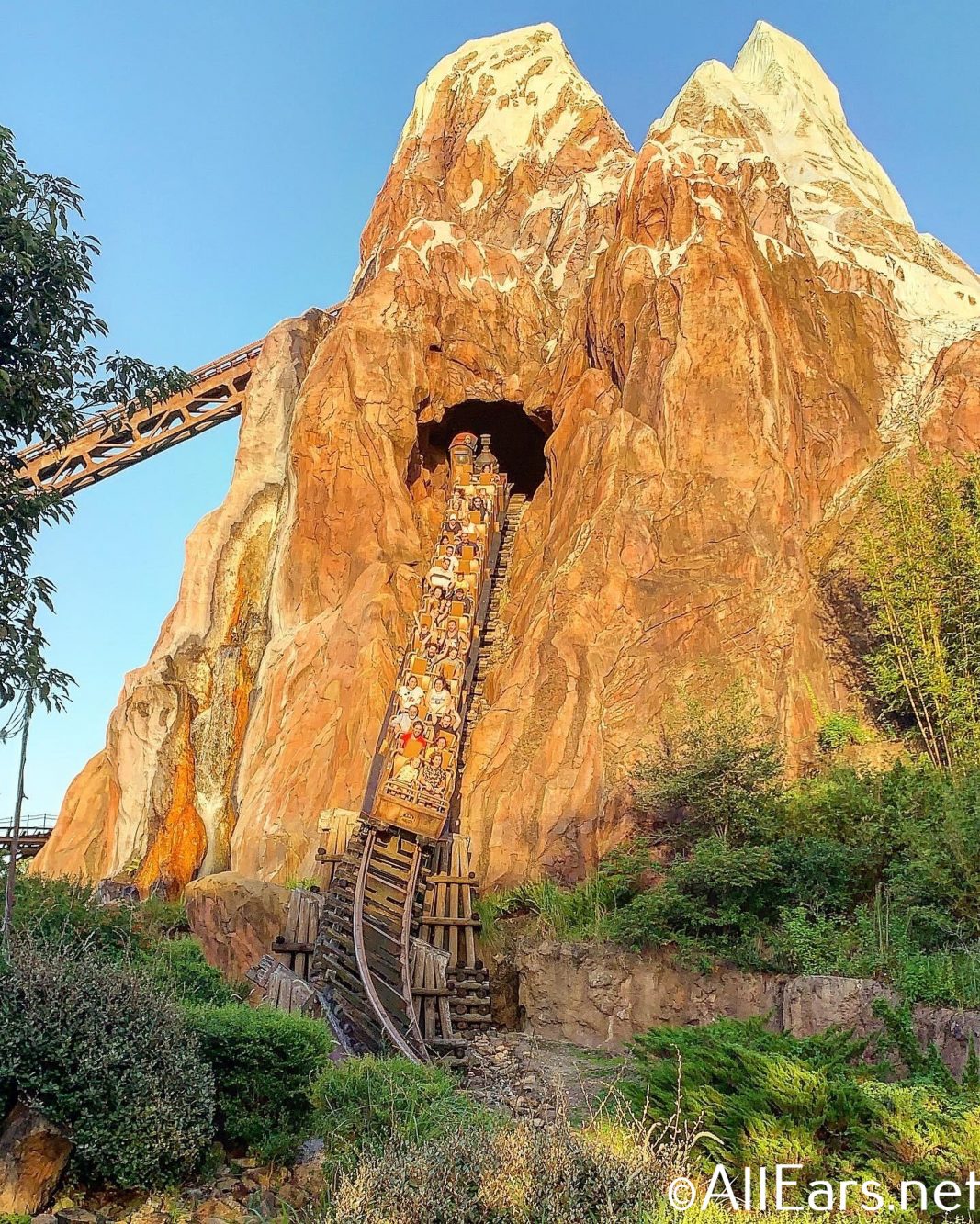 Expedition Everest is a perilous journey aboard a runaway train through the Himalayan mountains. Adventurous riders push deep into the lair of the feared yeti, guardian of the forbidden mountain. En route, they encounter torn tracks, spiral backwards through the fog into an ice cavern and dart into and out of the mountain in a high-speed adventure.

The attraction is located in the Asia section of Disney’s Animal Kingdom, across from the Rivers of Light ampitheater. 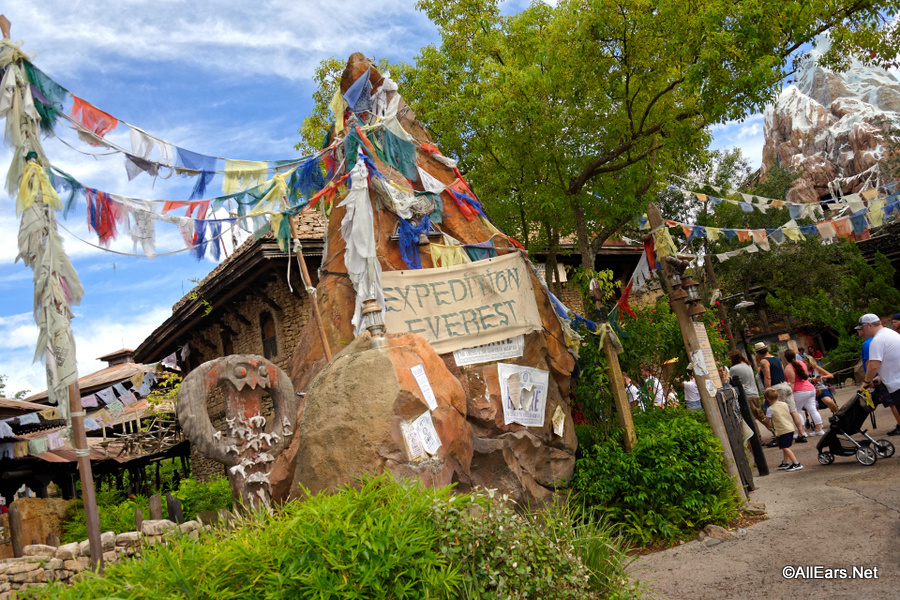 Expedition Everest has one of the most detailed backstorys and queues of any Disney attraction. The attraction takes places in the quiet mountain village of Serka Zong, where natives honor and respect the legendary guardian of the mountain (the Yeti).

In the queue, you’ll notice prayer flags, as well as shrines and carvings honoring the Yeti.

Despite forewarnings and local legends, the proprietors of Himalayan Escapes tour company are offering excursions through the Himalayas. You’ll pass through Proprietors Norbu and Bob’s booking office to travel documents and permits, and then it’s off to Tashi’s General Store and Bar for needed supplies for the journey. 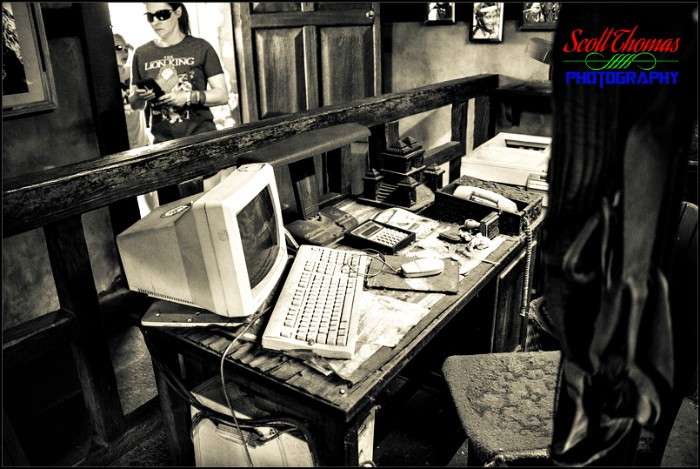 You’ll then weave through an old tea warehouse that houses a Yeti museum run by Professor Pumba Dorjay, a conservation biologist who believes in the yeti’s existence. Here you’ll see artifacts reflecting Nepalese culture, a history of the Himalayas, photos of those who have hiked to the summit and tales of the yeti. 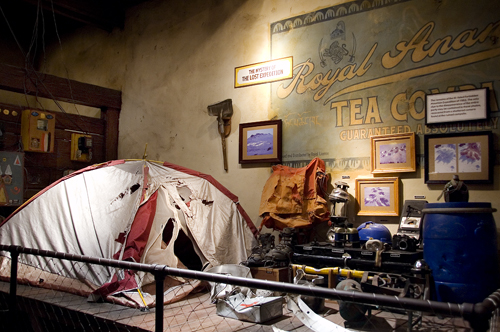 Attraction: You’ll board the Anandapur Rail Service, which was once used to transport tea, is now destined for the foot of Mount Everest and the Forbidden Mountain.

The train initially glides through bamboo forests and tea farms before beginning its climb to the top. En route, a cluster of sacred yeti totems and a massive yeti mural crafted on the rockwork give warning to turn back.

As you reach the mountain’s peak. the train screeches to a halt near a gnarled mass of twisted metal. In a fit of rage, the yeti has torn apart the track! The thrills intensify as the runaway train shoots backward through darkened mountain caverns and icy canyons.

As the shadow the yeti appears, the train accelerates down an 80-foot plummet and twists around the mountain. You’ll then dive into a dark cave where you come face to face with the Yeti!

Important Note about the Yeti: When the attraction opened, the Yeti was an awesome audio-animatronic figure, moving and grabbing at the train. Unfortunately,  there were problems with the Yeti figure and it no longer moves.  It’s still towering and intimidating though!

Lighning Lane access for Expedition Everest is available for purchase as an Individual Attraction Selection. The attraction often has very long lines.

Safety Information: This is a high speed (maximum 50 mph) roller coaster with sharp and sudden turns, drops and forward and backward movement. You should be in good health, free from high blood pressure, head, back or neck problems, motion sickness or other conditions that could be aggravated by this ride. Expectant mothers should not ride. Those traveling in a wheelchair must transfer out to the ride vehicle.

Each train has 17 rows seating 2 persons each. Each seat has its own lap bar, which lowers like the one on Big Thunder Mountain Railroad.

Seats may be a bit tight for some, and leg room may be limited for taller guests, though overall, our readers report that the ride is comfortable. Click here for more Seat Restrictions Reports. A sample car is available: exit the gift shop and turn right. For the ride seating photo gallery click HERE.

There is a single rider line. This means if you don’t mind being separated from the rest of your party, you can ride the attraction with less of a wait. You will be pulled from the single rider line to fill in empty seats created by odd-numbered groups. 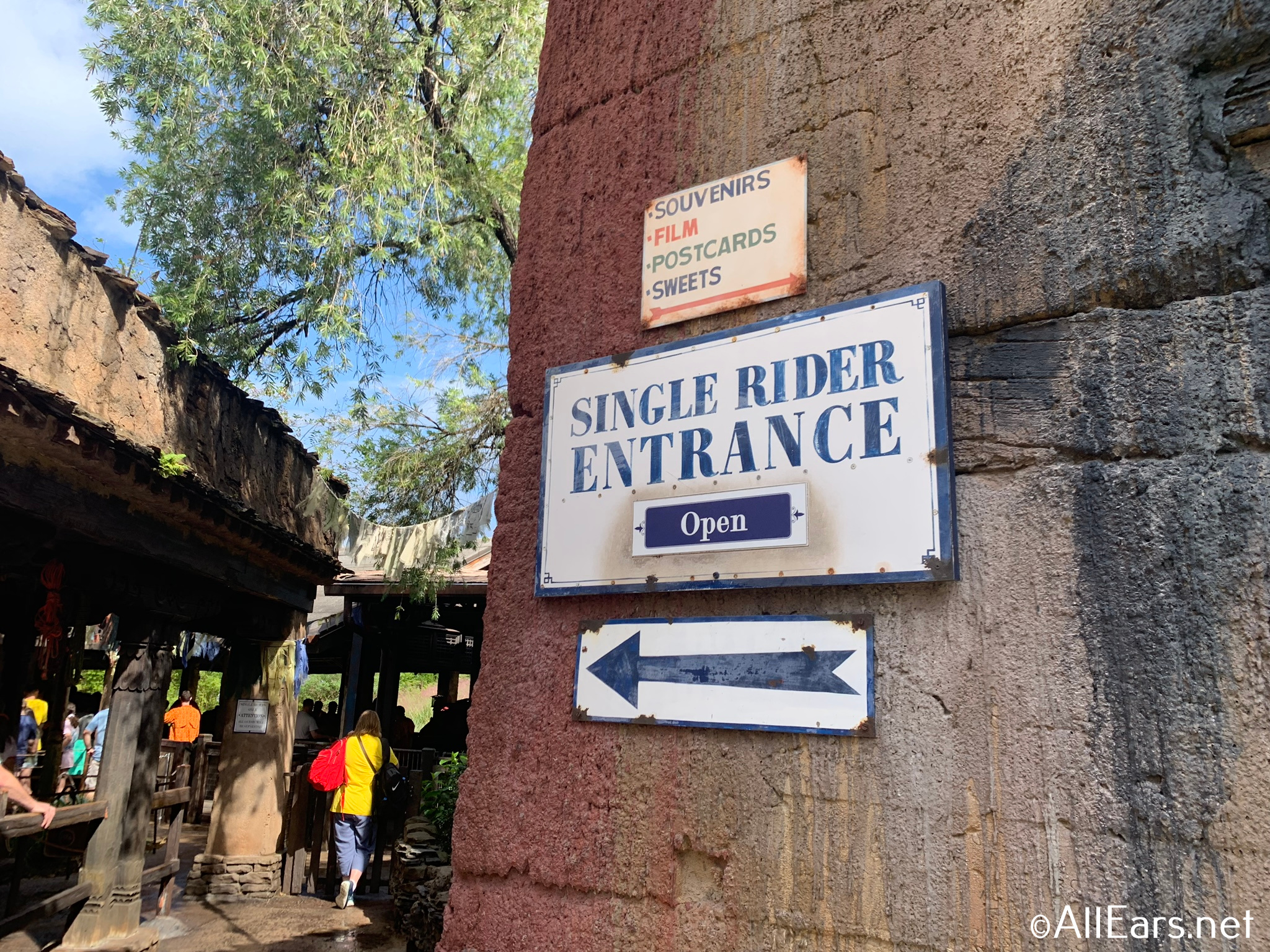 The nearest restroom is located by the Anandapur Ice Cream Truck.

There is a ride photo, but no ride video. 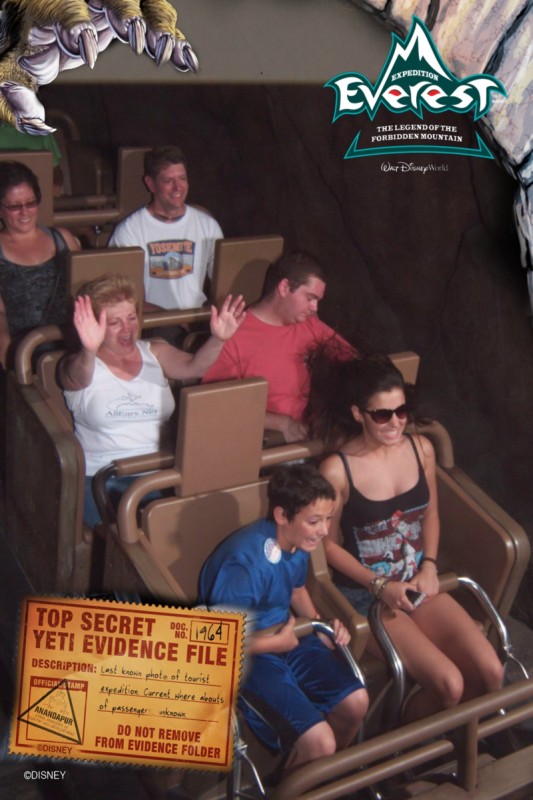 Accessibility: Persons traveling in a wheelchair must transfer out to the ride vehicle. While accessible, the queue may be difficult in an ECV.

Service animals are not permitted on this attraction.

For a more wild ride, request to sit in the back.

You’ll exit the attraction into the Serka Zong Bazaar which is an Expedition Everest themed gift shop. Here you’ll find exlusive items such as Yeti plushes and Everest themed shirts and other merchandise. 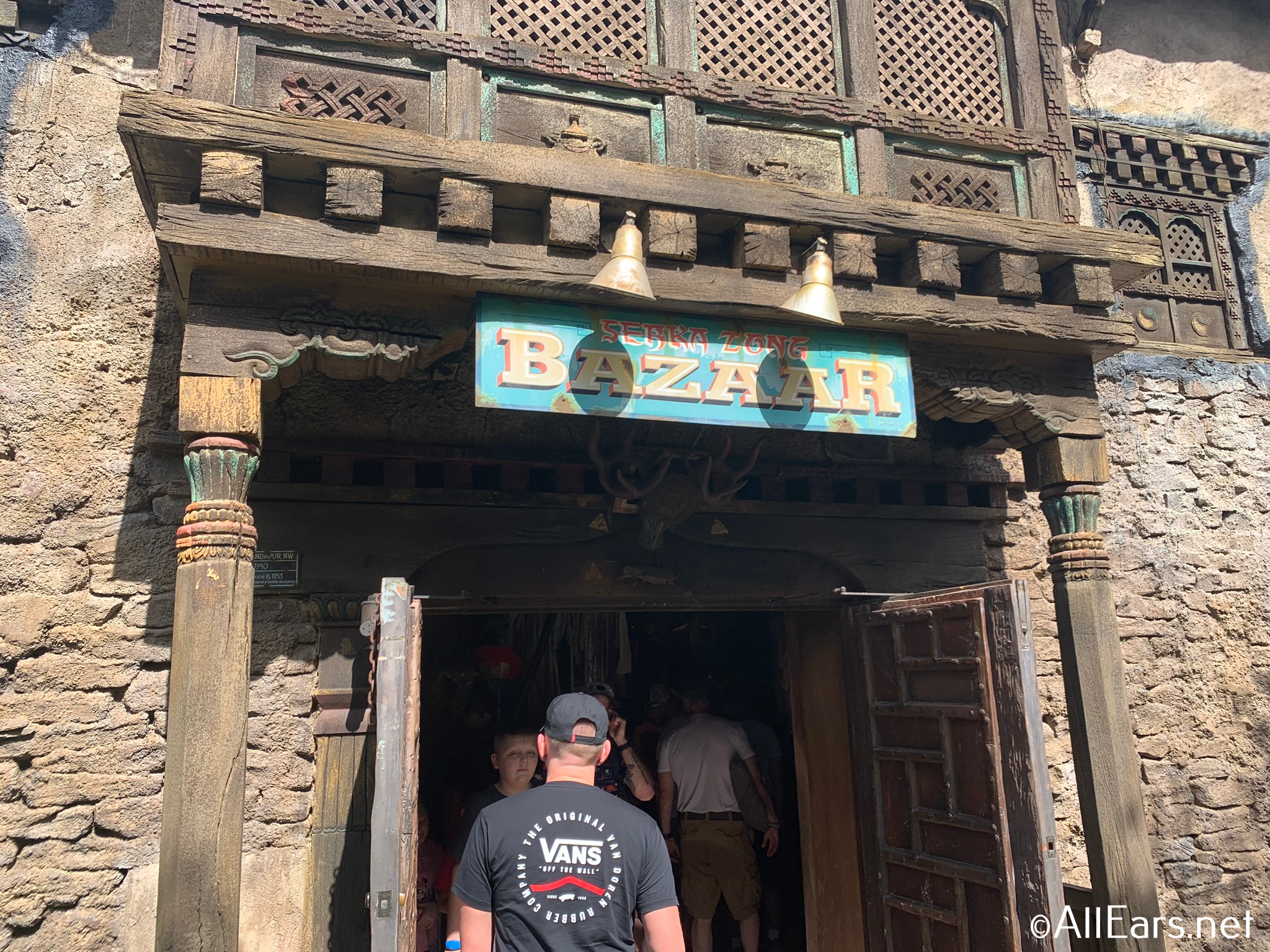 The tallest mountain peak is just under 200 feet, making it one of the tallest attractions in Disney World.

The Yeti’s nickname is Betty (Betty the Yeti).

Yeti, Guardian of the Mountain: When it was functioning properly, the mammoth-sized Audio-Animatronics yeti had a potential thrust, in all of its hydraulic cylinders combined, of slightly over 259,000 pounds force — potentially more instantaneous power than a 747-400 airliner.

Forced perspective: To create the sense of an enormous mountain range, Imagineers painted a “mural” of shadows across the face of the mountains. The range, glaciers and valleys is a canvas of rockwork, carvings and painting creating a forced perspective where closer-in objects have a massive look while appliqués trick the eye into perceiving far off objects.

More than 900 bamboo plants, 10 species of trees and 110 species of shrubs are being nurtured and planted to re-create the lowlands surrounding Mount Everest.

1,800 tons of steel were used in the mountain structure. That is about six times the amount of steel used in a traditional office building of this size.

The mountain is crafted with more than 3,000 pre-fabricated “chips” created from 25,000 individually computer-molded pieces of steel.

2,000 gallons of stain and paint were used on the rockwork and throughout the village. The color scheme has ritual meaning to the Himalayan culture.

In the Himalayan regions, villagers commonly preserve yak dung and dry it out on village walls. They later use the hardened material as fuel in their homes. Disney Imagineers recreated the look of these walls in the Serka Zong village area.

Artists from Imagineering used hammers, chainsaws and blowtorches to “age” wood and buildings in the village, giving them the appearance of being longstanding parts of the landscape.

The 1953 famous final ascent of Sir Edmund Hillary is represented in Disney’s man-made mountain. The coloring of Mount Everest differs from the rest of the mountain range because at more than 29,000 feet elevation, hurricane-force winds often blow the snow off its peak, revealing a raw sheet of rock.

Some 2,000 handcrafted items from Asia are evident in the props, cabinetry and architectural ornamentation.

For more information and interesting facts about Expedition Everest, check out this AllEars TV Video:

Expedition EVEREST, billed as a family thrill ride and less intense than Rock ‘N’ Roller Coaster, substitutes backwards drops for multiple inversions. “We go fast, we go high, we fall far, we get cold, and we do finally see the Yeti itself,” says Joe Rohde, executive designer at Walt Disney Imagineering and lead designer of the park. “He’s a huge, HUGE, gigantic shaggy creature as real as we can bring him to life.”

The ride is officially scheduled to open in 2006, however, from the podium Rohde suggested his team is striving to bring the project to fruition by fall 2005. Location? Between Kali River Rapids and Tarzan Rocks, closing the gap around Discovery River and providing a new path between Asia and DinoLand U.S.A. (by Dave Marx (PassPorter.com) and Debra Martin Koma (AllEarsNet.com) on location at Walt Disney World for Disney’s Animal Kingdom’s 5th Anniversary)