As part of Disney’s big media event, we got an early look at the pre-show for Mickey & Minnie’s Runaway Railway! Let’s take a look at the biggest premiere of 2020, shall we?

The pre-show takes place in the Chinese Theater, and our reporters have said the experience reminds them a lot of The Great Movie Ride.  New additions include digital posters on the walls showing shorts that have already premiered at the theater. This is original artwork, meant to show the theater’s history.

The music is done by Christopher Willis, who composes the soundtrack for the Mickey Mouse cartoons that inspired this attraction. Each song is one of Willis’s favorite pieces from the series, composed in the style of the Golden Age of Hollywood! If you’ve listened to the covers of Disney classics playing at the gates to Hollywood Studios, you have an idea of what to expect.

Finally, the main attraction! Guests are ushered into the theater to watch the premiere of Mickey and Minnie’s newest short: “The Perfect Picnic!” An original number, Nothing Can Stop Us Now plays during the short! The song is definitely cheery and upbeat, but considering this is a ride about a runaway train, I can’t help but think it might be getting an ironic reprise! 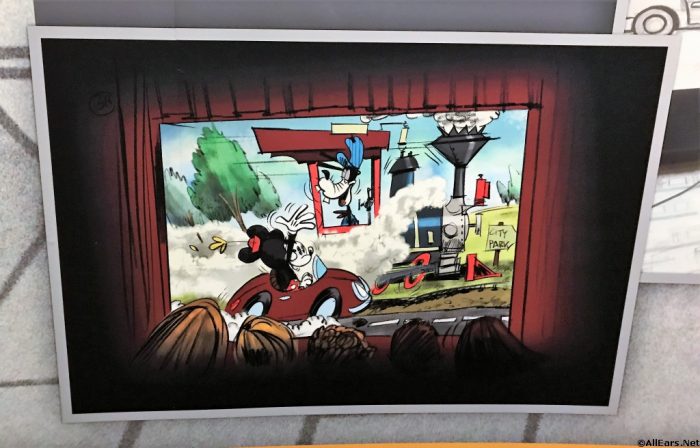 The short also gives us another glimpse into the attraction’s story! Mickey and Minnie are preparing for a day in the park, when poor Pluto accidentally gets shoved into the trunk! As they begin their leisurely drive, they see Goofy driving a train and give him a friendly greeting!

However, once they cross the tracks, Pluto is launched out of the trunk with a pie and jams the train’s smokestack! The engine overheats and then explodes, taking out the screen with it! When the dust clears, a portal has opened to the cartoon world, while Goofy enlists your help in reuniting Pluto with his owners! This was the most spectacular part of the pre-show! That transition between cartoon and live-action was insane!  Unfortunately,  our preview ended before we could board the ride vehicle, so we’ll have to wait until March 4th  to see what happens next!

It should be noted that the Disneyland version of this attraction will have a slightly different pre-show. We haven’t gotten a preview yet, but we know it’ll be set in the whimsical El Capi-toon Theater, and have a much more cartoony tone throughout the queue.

We also know the queue will draw some inspiration from Who Framed Roger Rabbit, showing off “props” from the Toontown Hysterical Society as opposed to the more grounded posters and animation cels in the Hollywood Studios version.

We can’t wait until March 4 to ride this in Disney World!

Are you excited for this new attraction? Let us know your thoughts in the comments!

Disclosure: We were invited by Walt Disney World to attend the media preview of Mickey & Minnie’s Runaway Railway. This did not affect our reporting of the event — our opinions are our own.

2 Replies to “We Had An Early Look at Mickey & Minnie’s Runaway Railway in Hollywood Studios!”

Can You Renew Your Previously Expired or Canceled Disney World Annual…